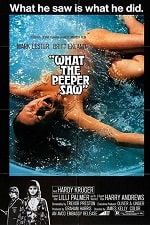 Description: A wealthy author's second wife begins to suspect that her 12 year old stepson may have murdered his mother, who mysteriously died in a bathtub accident.